Creating Bonds to Last a Lifetime.

The Cologne Peace Daycare Center located in Jaffa, just south of Tel Aviv, occupies a special place among NA’AMAT facilities in Israel. It is the only NA’AMAT daycare center to offer bilingual early childhood education and serve a mixed group of Jewish and Arabic children. By design, its student population is kept strictly in balance, half Arab and half Jew, with the Arab students equally divided between Christians and Muslims. Parents who wish to enroll their children in this unique program—and the waiting list is long—must commit to attending multi-cultural workshops and volunteering time at the school.

Classes are taught by teams of Hebrew- and Arabic-speaking teachers so that students gain exposure to each other’s language. Children learn the alphabet, numbers and colors, and sing songs in both languages. Jewish, Christian and Muslim holidays are recognized and celebrated with the same joyful enthusiasm as part of the school’s commitment to egalitarianism and mission to promote mutual understanding and peaceful coexistence. Students graduate from the school not only well prepared to begin elementary education, but also with the experience of having made friends across religious and ethnic boundaries. That is a gift that will benefit them throughout their lives. The Cologne Peace Daycare Center is a beacon of hope for all Israeli citizens. 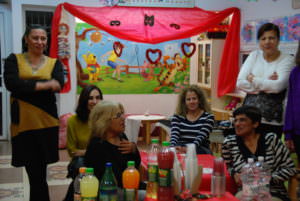 NA’AMAT USA recently spoke with the center’s director Sivan Kedem and two of its teachers. Siham Satel, who is Arabic, has worked at the center for 26 years. Revital Hason, who is Jewish, has worked there for nine years. The two women lead a class for children ages four and five.

NA’AMAT USA: Tell us about the Cologne Peace Daycare Center.

SIVAN KEDEM: The center was established 30 years ago. Its original director, Yael Ben-Shahar, wanted to create a daycare center for all the people of Jaffa. Jaffa is a special, multicultural community in Israel. Jews and Arabs live side by side. Traditionally, Jews and Arabs are educated separately in Israel. They don’t often meet or interact as they grow up. The founders of this school wanted it to be a place where children live and learn together. The families who come here want that experience for their children. Multiculturalism is their agenda. 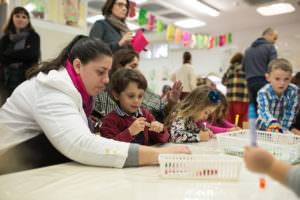 NA’AMAT USA: That’s quite interesting. Tell us more about the parents.

SIHAM SATEL: The parents who bring their children here believe in peace. They want to mix with others, to be good neighbors. And they are not just from Jaffa, but also from Bat Yam and other surrounding communities. When they send their children to this place, they also get to know each other. We celebrate all the holidays…Christian, Muslim and Jewish. The parents come to all these celebrations so they get to mingle and learn about the other cultures.

NA’AMAT USA:  Are all of your staff members bilingual?

REVITAL HASON: The Arabs know both languages. The Jews understand some Arabic. One of our workers, Batia Ben-Simone, who recently retired after working here for 23 years, is Jewish but learned to speak Arabic fluently. Her family is from Tunis, so she knew some Arabic from home. 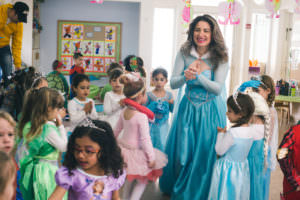 NA’AMAT USA: How do the children get along?

SIHAM SATEL: The kids get along great! The Arab children know both languages—the get a lot of exposure to Hebrew. The Jewish students, if they stay with us for three or four years, learn to speak some Arabic. They learn numbers, the names of fruits and vegetables, colors.

REVITAL HASON: We had two girls a few years ago, one Jewish, the other Arab, who became really good friends. The Jewish girl spoke no Arabic and the Arab girl spoke no Hebrew, but each learned the other’s language because they wanted to communicate.

NA’AMAT USA: You recently celebrated International Women’s Day. How did that turn out?

SIHAM SATEL: It was very successful and great fun. We asked the mothers to bring a dish so that we could have a meal together and experience each other’s food. We also did yoga together. It was great! It brought the mothers closer together and was a good bonding experience.

REVITAL HASON: The parents are invited to all of our events. They want to join in and participate. We had a Christmas party with a Santa Claus. In a few months we’ll have a feast for Ramadan. We celebrate Passover and Easter. 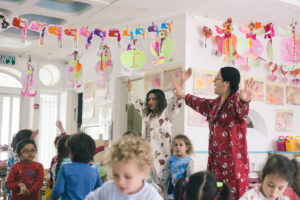 NA’AMAT USA: It sounds like you are building bonds not just between children but between communities.

SIHAM SATEL: That is our purpose.

REVITAL HASON: We are building bridges that help people communicate.

NA’AMAT USA: What can the women of NA’AMAT USA do to support your work?

SIHAM SATEL: Share our story. Deliver the message that people can live together in peace. It is possible!

REVITAL HASON: Children here learn in an atmosphere of mutual respect. The connections you make during your early years are very strong. They can last a lifetime.