Director of NA’AMAT International praises NA’AMAT USA’s plans to fund the construction of a new women’s health care center in the besieged city of Sderot. 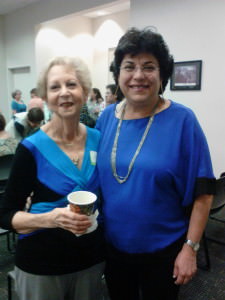 Shirli Shavit, International Director of NA’AMAT Israel, told a gathering of members of NA’AMAT USA in Los Angeles that their support for day care centers and other social services in Israel continues to fulfill a critical need. She citied NA’AMAT USA’s 90th anniversary project to fund the construction of a women’s health care center in Sderot, Israel as an example of the organization’s commitment to improve the lives of women, children and families in the face of increased terrorist threats and political tension.

Shavit’s remarks came during a welcoming session sponsored by the Western Area and San Fernando Valley Council of NA’AMAT USA. The event also included the presentation of a short film celebrating NA’AMAT USA’s 90th anniversary.
Shavit said that Israeli citizens live today under daily threat of terrorist attack. “The Israeli people want peace with their neighbors, but for many months we have not had one quiet day,” she observed. She added that while in the past terror incidents were largely centered near Gaza and Israeli settlements in the West Bank, the current wave of attacks have been spread throughout the country, leaving the entire population afraid and on guard.

The Israeli government has responded by stepping up security measures, but at the cost of putting increased strain on social service programs.  NA’AMAT is working to fill the void by building new day care centers and extending its support programs. “NA’AMAT is doing things that the government lacks resources to do,” she said. 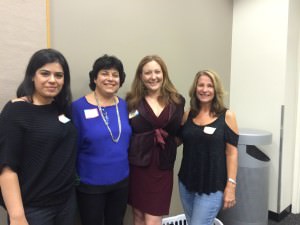 Last year, NA’AMAT added five new day care centers, bringing its total to 230 nationwide. One of those, in Be’er Sheva, was built with funds provided by NA’AMAT USA and dedicated to the memory of Alice Howard, former National President of NA’AMAT USA, from Encino, CA. NA’AMAT Israel plans to open four more day care centers in 2016.

NA’AMAT also recently expanded the programs of its technological high schools, which primarily serve underprivileged youth, to include students in the 7th and 8th grades. It has expanded its scholarship program for college students and boosted support for its legal aid and health care centers. All told, NA’AMAT provides services to 40,000 families in Israel, making it one of the largest social services agencies in the country. Its program for at-risk youth it the nation’s largest, serving 4,000 children. 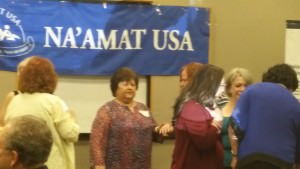 Shavit called Sderot, site of the new women’s health care center funded by NA’AMAT USA, a community with unique needs. Located in the Negev less than a mile from Gaza, the city of 24,000 people has been subject to more than 8,700 rocket attacks since 2000. More than 80 percent of the city’s children suffer from the effects of trauma. Modeled after a NA’AMAT facility in Karmiel, the women’s center will provide health care screenings, legal assistance for women, psychological counseling, exercise classes and recreational activities and other services currently lacking in the community. “It will be a unique resource for women and their families,” Shavit said, “made possible through the generous support of NA’AMAT USA.”

Shavit said that the new center will serve as a potent symbol of the 90-year bond between the women of NA’AMAT USA and their sisters in Israel. “What NA’AMAT USA has accomplished is remarkable,” she said. “For 90 years, it has been our devoted partner, whose commitment and support has never wavered.”