Susan Isaacs, a member of NA’AMAT USA’s San Fernando Valley Council, Eilat Chapter, talked about the organization’s work in behalf of women, children and families in Israel in a recent speech to congregants of Eretz Cultural Center, an Orthodox Persian Temple in Reseda. Isaacs described the scope of NA’AMAT’s charitable activities, which include the operation of day care centers located throughout Israel, as well as technological high schools, health and legal aid clinics, and other programs, all of which receive direct support from NA’AMAT USA. 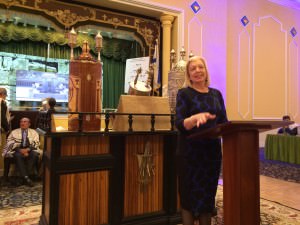 Isaacs has been a member of NA’AMAT US for more than 15 years. She has served as the Eilat Chapter’s Programming Co-Chair and President. She is also immediate past president of the San Fernando Valley Council. For the past three years she has been a National Board member serving on the Leadership committee.