Ivy Liebross, National Vice President of Leadership Development for NA’AMAT USA and past President of the organization’s San Fernando Valley Council, recently discussed the organization’s mission before a group of more than 200 women attending a “Women of Passover” celebration hosted by Valley Beth Shalom’s  N’Shama Minyan. The event was held on Saturday, April 16th at Valley Beth Shalom in Encino. 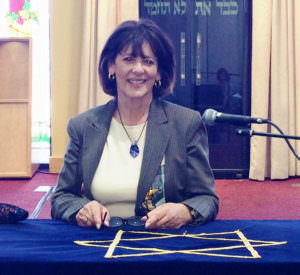 Acting in behalf of NA’AMAT USA’s national Speakers Bureau, Liebross, a Sherman Oaks resident, described NA’AMAT’s work to enhance the quality of life for women, children and families in Israel, the United States and around the world. She talked about the San Fernando Council, the many volunteer and social events its members participate in, and the fun they share. NA’AMAT USA is currently celebrating its 90th anniversary. Many congregants expressed an interest in membership.

Valley Beth Shalom’s N’Shama Minyan is a quarterly service conducted by and for women and designed to provide “a warm spiritual experience infused with music and joy.” It’s open to anyone and held on select Saturdays at 9:30 a.m. Rabbi Nina Bieber Feinstein leads the event with Cindy Paley Aboody as Cantorial Soloist.