Shirli Shavit thanks NA’AMAT USA members for emergency funding to safeguard children and families from violence.

Shirli Shavit, Director of the  International Department of NA’AMAT Israel, said that the organization is acting swiftly to secure day care centers and assist children and families traumatized by violence during the current crisis in Israel—but that more needs to be done. Shavit’s remarks came during a special gathering of NA’AMAT USA members at a private home in Sherman Oaks. The event was chaired by NA’AMAT Western Area Coordinator Hilary Botchin.

The support that NA’AMAT Israel has received from NA’AMAT USA and eight other “sister” countries has been vital to its ability to continue to serve families safely during the current conflict. “I wanted to share with the Haverot what we are going through in Israel, and express our appreciation for their continued devotion and commitment,” Shavit said.

Shavit described the challenges faced by children, families and care-givers in the wake of daily sirens and imminent threat of rockets. The fragility of the current cease fire suggests that NA’AMAT facilities in Israel remain vulnerable and have an ongoing need for supplemental funding. NA’AMAT USA has been carrying out an emergency fundraising effort since Israel began military operations in Operation Protective Edge.

Carolyn Ben Natan, Director of Public Affairs for the office of the Consulate General of Israel in Los Angeles, also addressed the group. She spoke of NA’AMAT’s role in promoting the welfare of children, women and families, and its importance to the nation of Israel.

“It was an exciting night for our members,” said National President Elizabeth Raider. “We deeply appreciate having Shirli with us at a time when it was very difficult for her to leave Israel. We are very proud to support NA’AMAT Israel and glad that we live in a country where we are able to do so.”

Despite recent events, Shavit remains optimistic about the future of NA’AMAT and Israel. “Israel is a great country,” she said. “We hope and pray for peace and believe it will come soon.” 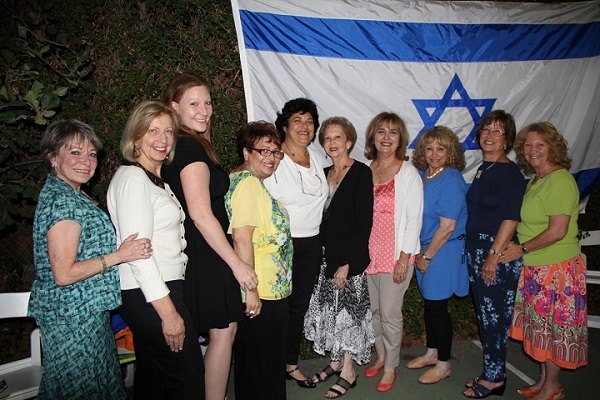 NA’AMAT USA is an organization striving to enhance the quality of life for women, children and families in Israel. Originally named Pioneer Women,it was founded as a sister movement to NA’AMAT Israel. NA’AMAT women act locally, nationally and globally in 9 countries. The organization is actively engaged in a wide range of issues, including religious pluralism, the status of women at home and in the workplace and the prevention of domestic violence.

Visit us on FACEBOOK at NA’AMAT USA and NAAMAT INTERNATIONAL