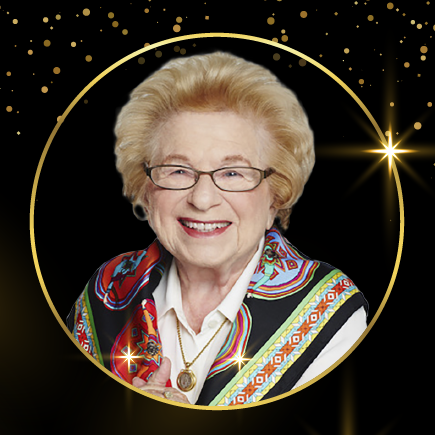 NA’AMAT awards 200 scholarships and research grants each year at the bachelor’s, master’s and doctoral level. The program is the only one in Israel geared specifically to female scholars, according to Shirli Shavit, director of NA’AMAT Israel’s International Department and the scholarship program. Shavit and NA’AMAT Israel President Hagit Pe’er brought greetings from Israel at the event, conducted on Zoom.

A VIP event for 34 major donors, moderated by Sharon Sutker McGowan, kicked off the afternoon. Participants were invited to ask questions directly to Dr. Ruth. Each participant also was sent a signed copy of Dr. Ruth’s book, “The Doctor is In.”

The gala continued in the ‘main room’ where Art Verity hosted the lively conversation with Dr. Ruth. The gala included a presentation  by NA’AMAT scholarship recipients, moderated by Dr. Ilana Kwartin, who received a scholarship in 2017. Dr. Maya Weinberg, a veterinarian working toward a Ph.D. in animal science, discussed her research on bats, and Eliana Avitzour talked about her work on gender bias among teachers. All the recipients expressed gratitude for the scholarships, which enabled them to complete their doctoral degrees.

Asked what advice she would give the scholarship recipients, Dr. Ruth said, “Celebrate that you were chosen. Then promise, like me, to help other women. Make the best out of the advantage you got. And say ‘thank you’ to NA’AMAT.”