Program supported by NA’AMAT USA and NA’AMAT Canada provides more than $100,000 in scholarship and grants annually to female students in Israel. 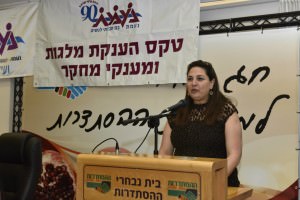 “The scholarship program has contributed to the advancement and empowerment of hundreds of young women,” said NA’AMAT USA President Elizabeth Raider. “It helps women complete their educations and find meaningful careers especially in areas where women have traditionally been under-represented. We are very proud of our support for this program and congratulate this year’s exceptional group of scholarship recipients.”

Some 190 students studying for Bachelors and Masters degrees were granted scholarships of 2,000 shekels (US$530) each. The majority of those students are pursuing degrees in science or technology fields, including engineering, computer science, medicine and veterinary medicine. In addition, NA’AMAT presented four research grants of 10,000 Shekels each (US$2,650) to Ph.D. students concentrating on gender studies and the status of women.

Milena Iliasov a Bachelor of Arts candidate in Industrial Engineering and Management at Technion, Israel Institute of Technology, speaking in behalf of scholarship recipients, said the awards will “open doors for a successful integration in academia and the employment market.”
“We are filled with gratitude for the great giving that encourages growth and self-fulfillment, but above all, allows us to devote our attention to matters that are at the focal point of our lives right now – academic studies and social activity,” she said. “Today we are on the receiving side. Hopefully, in the future we will stand on the other side and contribute to promoting higher education in Israel among young women.”

Shirli Shavit, Director of the International Department of NA’AMAT, noted that the continued support of NA’AMAT USA and NA’AMAT Canada has been crucial to the betterment of young women. “It really does make a difference for our students!” she said. “We should all be very proud of this unique enterprise for the success of our young generations and the promotion of higher education.”