Escaping the Nightmare of Domestic Violence

NA’AMAT’s Glickman Center for the Prevention and Treatment of Domestic Violence helps to save and rebuild lives.

The women living at NA’AMAT’s Glickman Center during my visit were escaping homes where threats and violence were the norm. A young Ethiopian woman arrived with her baby, seeking to break free from her husband’s violent attacks. Another battered woman came with only one of her six children, the others remaining with her husband. All the women found a safe haven at the center, surrounded by skilled and caring people.

My visit to the Glickman Center for the Prevention and Treatment of Domestic Violence in Tel Aviv gave me a complete picture of this remarkable facility, founded by NA’AMAT in 1993. Major support has come from NA’AMAT Canada, which funded the original building and an addition. Meeting the staff and touring the attractive, comfortable facility, I learned about its comprehensive program to help victims deal with the trauma they had suffered. 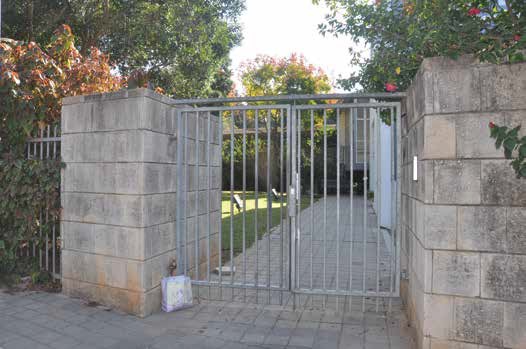 Although there were 9 women and 13 children in the shelter when I visited last November, the center can house up to 12 women and their children. Generally, the women remain in the shelter for 6 months but may stay up to a year. A woman may decide to leave earlier, even return to her abusive spouse. By law, the staff cannot intervene. Only the woman, herself, or a community social worker acting on her behalf can file a complaint with the police or ask for a restraining order.

When a woman is referred to the shelter by a community social worker, she may arrive at the center following her own appeal for help, a neighbor’s report of domestic violence, a hospital visit or a complaint to the police.

Social worker Yael Levin, the director of the Glickman shelter, explained that it is not easy for the woman to decide to come to the shelter. She has to leave her home, her surroundings and sometimes her children. She may bring sons up to age 11. There is no age limit for girls, but it is felt that boys over the age of 11 would be put in an uncomfortable position, rooming with their mothers and perhaps another mother and her family.

The cultural mosaic of the nine women included five women from Ethiopia, one from South America, one from Russia and two native Israelis — one Jewish, one Muslim. They all spoke Hebrew except for one of the Ethiopians.

A volunteer comes once a week to teach her Hebrew and the other Ethiopians who speak Amharic help. 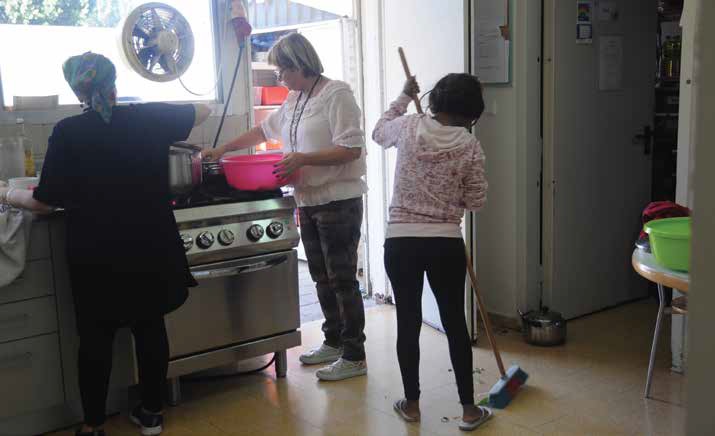 All shelter residents are expected to prepare some meals and help keep the premises clean.

One of the Ethiopian women is 22 years old with a 1-year-old daughter. She came to Israel as a young child, living in a home where domestic violence was the norm. Her mother was abused and it is believed the girl, herself, was sexually molested. She ran away from home, got involved with drugs and alcohol and never completed high school. When she married, she found herself in the same situation she had run from. After a particularly vicious attack by her husband, she was referred to the shelter. During the few months that she has been here, Yael said, there has been a remarkable change in her personality, behavior, relationship with her daughter and her willingness to accept responsibility and participate in daily activities.

Yael has served as director for only a year, but for many years she worked in a domestic violence treatment center for men in Holon. She said that the young Ethiopian woman was very angry when she came to the shelter. She yelled at her child, didn’t show her any affection and wanted nothing to do with the required routine. All residents are expected not only to clean their own rooms, but also to help keep the center clean, cook meals and adhere to the shelter schedule.

Residents are expected to prepare breakfast for their families. Lunch for the women and children is served in the dining room. This includes kids up to age 5 who attend the on-premises day care center as well as older children who are mainstreamed into local schools. Everyone is expected to eat dinner together at 6.

Yael Levin, director of the shelter at the Glickman Center.
Kindergarten teacher Ronit Isaac holds one of the babies.
Orit Earon, long-time director of the open section of the center.

The routine was difficult for the young Ethiopian mother, but intensive individual counseling and group therapy brought about a dramatic change. She now is able to relate to her child, to hug her and speak lovingly to her. She has a job cleaning houses, earning money for the first time. There is also the hope that she’ll go back to school and complete her education.

Yael told me the story of the South American woman, 38, who arrived with her two children, 4 and 6. In South America, she had been introduced to her husband by her sister who now lives in Israel. They married and came to Israel 8 years go. She has permanent resident’s status and speaks Hebrew fluently. Throughout her married life she was subjected to emotional violence. Her husband, who comes from a wealthy family, totally rejected her because she came from a poor, uneducated family. She had no access to money of her own. Even when she worked, her spouse took all her earnings. A good and loving mother, here at the center she is in psychotherapy for the first time.

The Russian woman has one child and is pregnant. She came to Israel as a teenager, marrying an Israeli when she was quite young. Her husband treated her “like property, with a lack of respect and concern,” said Yael. A victim of verbal and physical abuse, what is generally known as “intimate violence,” she was referred to the shelter by a community social worker.

Intimate violence includes physical, emotional, sexual and economic abuse, child abuse and stalking. It is estimated that about 200,000 women in Israel suffer from intimate violence. In 2016, 16 women were killed by their spouses or other family members. Some 600,000 children have witnessed domestic violence.

Interviewed in a recent Jerusalem Post article, Prof. Einat Peled of Tel Aviv University’s School of Social Work said statistics show that children exposed to violence in the home are more likely to lack stability and to experience emotional difficulties than other children. “We know that in the worst cases, the child lives in an environment of terror, fear and lack of confidence,” she said. “There could also be developmental issues stemming from the child’s exposure to problematic models for interpersonal communication and problem-solving.

“Witnessing abuse can affect the relationship between the child and his or her parents,” Peled added. “The relationship with an abusive father is problematic because of the violence, and the relationship with a mother who isn’t able to defend herself is also a problem because the child may see her as weak.” Yael told me that the Israeli Arab woman divorced her husband and was then abused by her brother, who threatened her physically and emotionally. Divorce is not accepted graciously by those who follow Islam — and she feared for her life. She was referred to the shelter by a community social worker.

One of the Ethiopians, married to a Bedouin, brought her 4-year-old with her. Her 6 other children remained with the husband who apparently is not abusive to them. Sometimes, as in this case, the father is very dominant. As a result the children turn their backs on the mother, making her life even more difficult.

Often, older children — and sometimes younger ones — who do not come to the shelter with their mothers are placed in a residential boarding school to remove them from a dangerous environment.

The women who come to the Glickman shelter are in dire need of support, counseling and direction. Just the beginning steps of the long process are emotionally arduous: reporting to the police, meeting a social worker, asking for a restraining order. And taking any of these steps often creates additional problems and backlash for the woman. Many go back to their spouses, and then the local social worker is notified. Those who have the desire and ability to become independent have options, such as going to a halfway house.

There are only 14 shelters for battered women in Israel — all of them run by non-profit women’s organizations like NA’AMAT under the auspices of the Ministry of Welfare. These include two for haredi (ultra-Orthodox) women and two in Arab communities. Sixty percent of the funding comes from the ministry. NA’AMAT covers 40 percent of the budget for the Glickman Center. A WIZO study documented that in the past year, 7,335 women, 1,021 children and 2,860 men went to 89 centers throughout the country for the treatment and prevention of domestic violence. 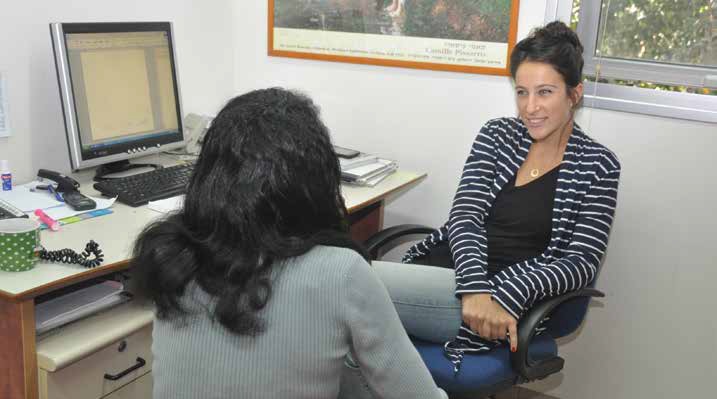 The Glickman Center deals with domestic violence 24/7. In the shelter, two social workers run the required group therapy sessions and another conducts individual psychotherapy and also works with the children. Group therapy includes the general psychotherapy group, a group dealing specifically with motherhood and a psychodrama therapy group. The goal is to empower the women, give them self-confidence and prepare them for an independent life.

A housemother guides the women in their daily activities along with a staff member who works with volunteers who come in the afternoons, evenings and nights. Night managers work evenings and weekend shifts, dealing with emergency referrals. The kindergarten teacher, Ronit Isaac, oversees three volunteers doing national service. Other volunteers come in after school to work with the children attending local public schools.

Fathers and children are encouraged to visit — but not at the shelter. Usually they meet at a community center in Tel Aviv.

The shelter is only part of the Glickman Center’s mission. The “open section,” under the longtime direction of Orit Earon, offers rehabilitation for battering men and counseling and support groups for victims of family violence — women, men and children. The center does not treat men whose families live at the shelter. It provides counseling, mediation and legal help for couples. No wonder Na’amat is well known for helping to rebuild families in crisis.

Na’amat attorney Efrat Nimerode provides a wide array of legal advice.
Social workers Sara Alush, left, and Dafna Rubin, right, talk to one of the residents about her child.

Providing a sense of interconnectedness, a beautiful open area with benches and tables — a place just to sit and relax — links the shelter, day care facility and the open section. A volunteer shows mothers and children how to play volleyball on a small court.

NA’AMAT first called attention to the problem of domestic violence in the 1980s when it was only spoken about in whispers. Over the years, it has worked to protect battered women and help them take control of their lives. NA’AMAT has strengthened advocacy for victims of domestic violence and helped change how Israeli society responds to domestic violence. There’s still a long way to go — and the Glickman Center will continue to provide both a safe haven for women and leadership in combating a problem that is not going away.

Longtime NA’AMAT activist Judy Telman has lived in Israel for 31 years. Before she made aliya, she was a national vice president of NA’AMAT USA living in Chicago. She wrote about the Eleanor and Edward Epstein NA’AMAT Technological High School in our spring 2016 issue.