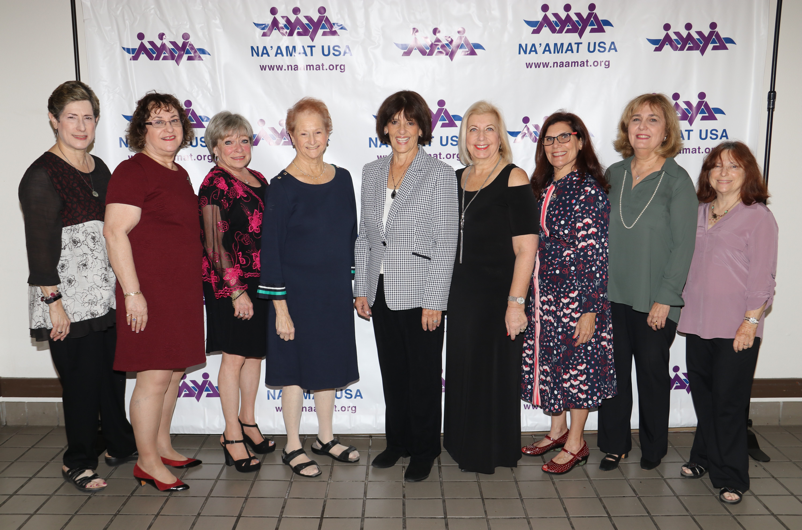 Los Angeles, CA 11/18/18 — On November 18, 2018, a community award ceremony was held at the American Jewish University under the auspices of the San Fernando Valley Council of NA’AMAT USA.  Known as the “Distinguished Community Leader Awards” or DCLA, this annual luncheon honors and celebrates community leaders who have given distinguished service to NA’AMAT and to the community at large. 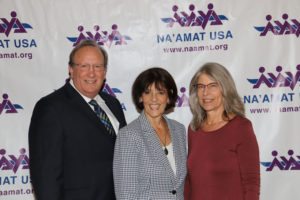 This year’s honorees were Pamela Rooks and Ivy and Dr. Burt Liebross.  Ms. Rooks is the Director of the Conejo/West Valley Melton School of Adult Jewish Learning.  Ms. Liebross is a founder of Eilat Chapter of NA’AMAT and currently a member of the National Board of NA’AMAT USA as Vice President of Leadership Development. Dr. Liebross is a prominent Los Angeles internist specializing in nephrology.

In accepting the award, Ivy Liebross expressed to the enthusiastic audience, “This organization and its achievements are always a team effort. I salute all my fellow members who give of their time, energy and effort on behalf of NA’AMAT.”  She concluded her remarks by adding, “The opportunity to work with these women who share these same goals has been a pleasure and privilege.” On receiving her award, Pamela Rooks echoed the message of teamwork as a driving force behind the success of her community service.

Another highlight of the day was a heartfelt overview of NA’AMAT’s many Day Care and Multipurpose Centers throughout Israel.  After a passionate presentation of how NA’AMAT is responding to the challenges faced by women and children during the current situation in southern Israel, Esther Friedberg, Western Area Coordinator, and Susan Isaacs, National VP of PR & Publicity, made a special appeal for further donations. The response was overwhelming and the Council received significant additional gifts.

San Fernando Valley Council leaders were thrilled with the success of the event.  “This is our most important fundraiser of the year,” said Roz Porton, SFV Council President, “so we really put a lot of effort into our selection of the honorees, the venue and the program.”  Deanna Migdal, Executive Director of NA’AMAT USA, was equally enthusiastic, “I am always so energized by the qualifications and messages of the leaders whom we honor at DCLA.”  The event was co-chaired by Susan Isaacs, Stacy Rubin and Rene Peters.